On the right of this picture is a bottle of Laird’s applejack  (apple brandy, not the Pony) showing what it looks like when you buy it.  (Source: Wikipedia.) 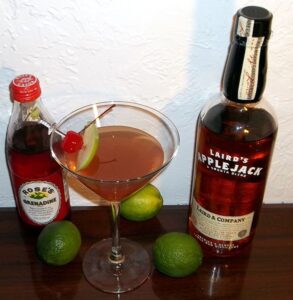 And this is what ours looked like after we did chemistry on it: What did we do to this poor alcohol?  We turned it into English Milk Punch.

All credit goes to my wife, who discovered that This Is A Thing.  The principle is simple: When milk curdles, the proteins in it act as a “flocculant”, meaning that they bind to undesirable chemicals and those chemicals get stuck in the resulting curds.

So the way you make the punch is very simple.  Here’s the recipe from the 1887 classic The Bar-Tender’s Guide by the legendary bartender Jerry Thomas (emphasis mine):

To two quarts of water add one quart of milk. Mix one quart of old Jamaica rum with two of French brandy, and put the spirit to the milk, stirring it for a short time; let it stand for an hour, but do not suffer any one of delicate appetite to see the mélange in its present state, as the sight might create a distaste for the punch when perfected. Filter through blotting-paper into bottles; and should you find that the liquid is cloudy, which it should not be, you may clarify it by adding a small portion of isinglass to each bottle.

Isinglass is a collagen taken from fish, but we don’t have to go that far; just a lot of filtering will do.

Benjamin Franklin also wrote down a recipe for this in 1763.  So this stuff has a pedigree.

The principle is simple: get the milk to curdle and it will take the rough stuff out of the booze.  Now like Franklin, our recipes included lemon (to bolster the curdling process) and sugar.

For the applejack: Add half a cup of lemon juice, about a teaspoon of powdered Vietnamese cinnamon, a single whole clove, and 1 cup of simple syrup to 2 cups of applejack.  Pour the mixture slowly into 1 cup of whole milk.  Give it a quick stir and then walk away for 30 minutes.  Pour through cheesecloth and then through coffee filters.  Funnel back into bottle for convenient storage (you cannot mix this up with the original applejack, as you see in the photo above).

For the pinot noir: Add 1 cup of lemon juice to 4 cups of wine.   Pour into 1 cup of whole milk and filter as above.  Then we added 1/2 cup of simple syrup (lower proportion, and added after the flocculation process).

Okay, it looks very different than the source liquor, but how does it taste?  The applejack punch looks like lemonade or limoncello … but it tastes much more of apple and cinnamon than lemon.  It is very sweet, of course, because we used so much syrup.

The pinot noir punch … I don’t know quite how to describe it.  It’s bright and tart (since we didn’t add nearly so much syrup to it), but here’s the thing: it’s not tannic.  Tannins add a lot of complexity to wine, but they also add a lot of bitterness, and if like me you can’t stand bitterness, they make most wines utterly undrinkable.  Guess what chemicals really enjoy binding to the curdling milk?  The tannins.

The insane thing you’ll read, and I can attest, is how smooth the liquor is.  It’s very drinkable (perhaps dangerously so).

This is a very neat technique and we’re going to experiment further with it.  Some recipes (like Thomas’s above) skip the syrup, relying upon the natural sweetness of the rum or brandy once the flocculation has smoothed things out.  Some say you want the milk to be hot to help the curdling; others say it doesn’t matter.  (Ours was cold milk right out of the fridge, but again, we’re going to experiment.)

See links below for articles on the subject.  (Check out the bourbon milk punch photograph in the NYT article … it, too, looks like lemonade.)